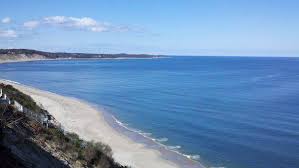 I started angling Sagamore Beach when I was around 10 years of age. At the point when I was 12, my family moved to a house found strolling good ways from Saggy Beach. Obviously, from that day ahead, I invested a lot of energy brushing the beachfront.

Sagamore Beach is certainly not an outstanding striped bass problem area. A couple folks angling along the whole seashore is a "swarm." Most people decide to angle Scusset Beach toward the east or amass their endeavours at the Cape Cod Canal.

This is one seashore where an absence of fisherman action has no relationship to the bounty of fish. Growing up, I would commonly be the primary individual angling the seaside, anyway at best I would get at least 20 schoolies with a little guardian bass or two blended in. It was pretty darn great angling, particularly considering probably the best surfcasting happened during the centre of July when many shore-bound spots evaporate.

Sagamore Beach is exceptional in that it highlights three unique conditions. A little stone field is strewn out toward the west. Toward the east is an extended length of sandbars. In the middle of the territory is usually a blend of the two sandbars and little shakes. Winter storms change the elements of the seashore every year-keeping things intriguing for the anglers and the fish.

A lot of Sagamore Beach contains rough regions isolated by sandbars, troughs and tidal pools. Every territory of the seashore warrants an alternate method, and each area of the shore additionally angles distinctively relying upon the season.

In the spring, I have had my best achievement focusing around the piers. The piers stretch out two or three hundred yards toward the east and west of general society area of the seashore. Small shad bodies and wavy tail grubs fixed on small leadheads function admirably during the long stretch of May on early-season schoolie bass. I've done continuously best angling off the tip of every pier during the high tide.

Focus on working the blue water (profound rough base), rather than the green water (shallow sandbars). There are numerous little fish that like to stick around the weed beds and little shakes off the piers, which like this draw in schoolie stripers. A few seasons vast schools of sand eels set up for business near shore. At the point when this happens white wavy tail grubs angled with a RedGill mystery turns into the "go-to" combo.

A decent view west from on Pike's Peak. The rock field is found straightforwardly underneath and west of Pike's. Ellisville Harbor and Center Hill Point can be found out yonder.

As spring offers an approach to summer, the rock field toward the west regularly outfishes the breakwaters. On the off chance that you plan on getting striped bass around the stones, at that point you should be prepared to get wet!

The best tide for this zone is the first two hours of the approaching. During this tide, the rock field is totally uncovered. Huge stones separate sandbars from tidal pools. Weed beds stretch out from the shore. Crabs, sand eels, the infrequent lobster and different snare fish call this region home. Schoolie stripers and little attendants eagerly attack the rock field with the approaching tide at their back.

The most profitable system for this region is to swim around the stones and cast little slug goes or different weightless delicate plastics. This is hugely energising angling. Ordinarily, I've looked as shockingly large bass whirl on a slug-go as it goes around a significant rock. Maybe the bass just gradually voyages around the stones, searching for something to eat up.

I recollected many mornings during the centre of the mid-year when low tide happened directly at dawn. As the sun crested into the great beyond I would end up amidst the stone field, encompassed by bass slurping down sand eels. One summer, I had a stretch of 14 straight days that I got at any rate ten basses from this stretch of water. A low tide combined with haze makes this angling experience far superior.

The sandbars toward the east towards Scusset Beach have consistently looked better for me in the fall. Obviously, this could be because I, for the most part, focus on the breakwaters throughout the spring and the rock field throughout the late spring. By and by the sandbars can deliver enormous bass 20 pounds and up for chunkers during October. Furthermore, play host to the absolute most unbelievable fall barrages Cape Cod brings to the table.

Around 10 years back Sagamore Beach had an unfathomable run of shelled nut shelter during September and October. A considerable number of child pogies went along the seashore in firmly pressed schools every morning and evening. Great many bass and bluefish benefited from this stunning encouraging chance.

On certain days, when seen from a separation, Sagamore Beach had all the earmarks of being moving. Tons of infant pogies would be constrained up onto the sand by the swarms of predators that encouraged in under 2 feet of water. Whole schools of pogies would be powerlessly ricocheting around on the seashore; it was an astounding sight and a fantastic live snare angling opportunity. I would regularly fill my swimming outfit pockets with pogies and live line them to bass in midsection deep water.

This kind of angling hasn't occurred for a couple of seasons now. Sure Saggy Beach is allowed with an intermittent bass rush, yet nothing to the greatness of 10 years back. I certify this to the absence of child pogies going down the seashore in the fall. On the off chance that the pogies return substantial numbers, at that point I'd anticipate that this fishery should make a rebound also.

Meanwhile, the sandbars among Sagamore and Scusset Beach still produce bass, particularly during October and November. On the off chance that you are searching for a significant fish, at that point hit this region up following a day or two of an inland breeze. For whatever length of time that the weed isn't really awful, a piece of pogie or mackerel angled along the base can possibly deliver bass well into the 30 pounds go.

When November moves around the more significant part of the Bay's seashores, stop to create any kind of dependable striper openings. Anyway, this isn't the situation for the Saggy Beach sandbars. Schoolies that I assume will, in the long run, clear their path through the Canal will now and then adventure into this territory for a speedy finish of the period supper. The springtime strategies I use around the breakwaters has created well around the sandbars as late as Thanksgiving. I've never gotten a bass from this territory during December, anyway I would not be astonished if the rare stray meanders through here during the twelfth month of the year.

My dad and I have seen naturally dead schoolie bass on the seashore while running this region during December. Possibly these fish stayed excessively long and afterwards kicked the bucket when the water temperature plunged down and wound up appearing on the seashore. Whichever way the fish were there shockingly late in the season.

Droopy Beach is an incredible spot to angle. A portion of my best angling recollections have been shaped while running here and there this little stretch of sand, rocks and stones pursuing flying creatures and bass.
If you are arranging a Cape Cod surfcasting trip, consider crushing in a brief period for Saggy Beach before heading back up highway 3 or 495.
By HAMZA at 5:38 AM